Until this past summer, I had no idea that the Department of Children and Families (DCF) had a wing that covered adults and the elderly. I guess I never thought about it—"families" would cover just about everyone, right?

Last July when my dad was lost and my mother was refusing help, I met a DCF caseworker who helped me through the next few weeks. She actually called me the day my dad was Baker-Acted. She called me because she had been alerted by the police that he was not taking care of himself and he had been involuntarily taken to the hospital for an evaluation. Once DCF learned that my father was safe, getting treatment and would be coming home with me temporarily, the caseworker jumped in right away to help get my mother evaluated. My mother had her own case opened, which in the long run will help me get any services for her that are needed. That evaluation proved that she was borderline competent and could continue living on her own without aid. But because my father needed medicine and a little assistance, both DCF and their doctor recommended an aid at home (not 24/7, but just during the daytime and early evening).

Fast forward to last week...all has been mostly great for the last couple of months since I was able to hire the aids for my parents. The phone calls have gone from a record 21 in a single day, down to about 1-2 per week. We have all settled into a routine again.

So last week when the DCF caseworker called to ask how everything was going, I updated her on the situation. She was very happy to hear that my dad was doing so much better. I told her how they've both had a series of doctor's appointments and are now following up with adjustments in their medications, dad got a new set of teeth, life is good. At the end of the conversation the caseworker told me that she was closing the cases on both my parents and wished us all well.

Now you would hope that the story would end there and life would keep moving forward, right? Well after a series of appointments, my mom has now been diagnosed with high cholesterol and hardening of the arteries. The doctor is recommending additional brain scans to see if surgery is necessary. So in the midst of all this, my mom is now refusing to take her Paxil, which has sent her over the moon crazy, angry, and paranoid. She's been accusing the daytime aids of stealing money, loosing the doctor's notes, and really just being in the way all the time.

Yesterday she got into it with their full-time aid, who finally left a little early because she was so upset. It's hard not to take things personally when these terrible accusations and being thrown your way. This morning we are trying to get her back to the doctor so she can get her back on track with her meds. My mom is terribly confused, completely uncooperative, and very paranoid. She doesn't want to take medicine and tries to control every situation.

My biggest predicament is—do I call DCF back and get them involved again? If you catch her on a good day, then my mom can be perfectly lucid and seemingly cooperative. However, if you catch like she was yesterday, anyone can tell that something is just not right. It's a slow, rocky path ahead, but as long as we don't get too far off, hopefully we can keep moving in a positive direction for both my parents.

Spread Your Wings!
Posted by kburns at 6:31 AM No comments:

Bet you didn't expect that as the title of an entry!

God, give us grace to accept with serenity the things that cannot be changed, Courage to change the things which should be changed, and the Wisdom to distinguish the one from the other.

Living one day at a time, Enjoying one moment at a time, Accepting hardship as a pathway to peace, Taking, as Jesus did, This sinful world as it is, Not as I would have it, Trusting that You will make all things right, If I surrender to Your will, So that I may be reasonably happy in this life, And supremely happy with You forever in the next.

This prayer has helped me to keep sane in even the most worrisome of times. Hoping it might help someone else out, too.

Spread Your Wings!
Posted by kburns at 6:46 PM No comments:

This is probably the 20th or so time I've titled an entry "Serenity Prayer," but there is good reason. Getting through tough times can be hard even with friends and family to support you.

Every time my alcoholic drunk texts me and every time he picks up my children to take them for a visit, my initial thought is to get angry and fight back. It takes every strength I have to not act like the child he does. It takes every ounce of self-control that I have to remember that even an active alcoholic has rights to see his/her children. And it takes everything I have not to talk badly about the alcoholic to my children.

The Serenity Prayer reminds me that I cannot change the world, I can only be at peace with the decisions I have made. The changes in my life and the lives of my children have put us in a much better place, although it's taken a good five years of working through a lot to get here. And though we have had some lean times the last few years and attended therapy and Al-Anon/Alateen, only through constant prayer and knowing that it's not my time, it's God's time, have I been able to get us through even the roughest of spots. 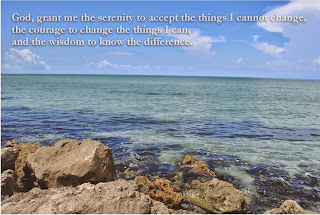 Courage to change the "things"—not people—is central to understanding the Al-Anon program. I cannot change people, no matter how much I would like to force my will on them sometimes. My toughest issue personally has been to overcome the idea that I cannot fix the world or that I have no control over others. I cannot force my will on anyone, not matter how hard I used to try. The only person I have complete control over is me. And as long as someone is not a baby or an invalid, other people need to learn to take care of themselves and understand the consequences of their actions. No one can take responsibility for another unless they first can take responsibility for themselves—their actions and their words.

As my kids left for a visit today, I immediately pulled out my "One Day at a Time in Al-Anon" book. I usually try to read it every couple of days (unfortunately I'm not organized to find the 5 minutes a day to read it everyday as I should). So I'm often reading tomorrow's verses today or yesterday's and today's verses simultaneously. Today, as I read tomorrow's entry, I especially appreciated the insight the unidentified Al-Anon members wrote— "I have only one person's guilt to carry: my own. If the alcoholic blames me for his difficulties, I will not accept that blame, but I will not defend myself, either, for that would only start a fruitless battle." Starting "fruitless battle(s)" with an alcoholic only contributes to the alcoholic's drinking and delusional thoughts and actions. So as difficult as it is for me to not argue or point out the flaws in my alcoholic's thinking, I try my hardest to stay focused on what I am able to control—my actions and words.