I know longer wonder why, wish things would change, hope the situation is better. I know that I have nothing to do with the "reasoning" behind my alcoholic's actions and words (or a complete lack thereof). The 3 C's of Al-Anon are a reassurance that I am not in control of anyone except myself. These 3 C's have been a source healing and a realization that I will never know what caused this situation, I have no control over, and I certainly can't cure it. That in and of itself has been a difficult reality, but eventually I began to truly believe the words and I know I'm on a healing path because of them. 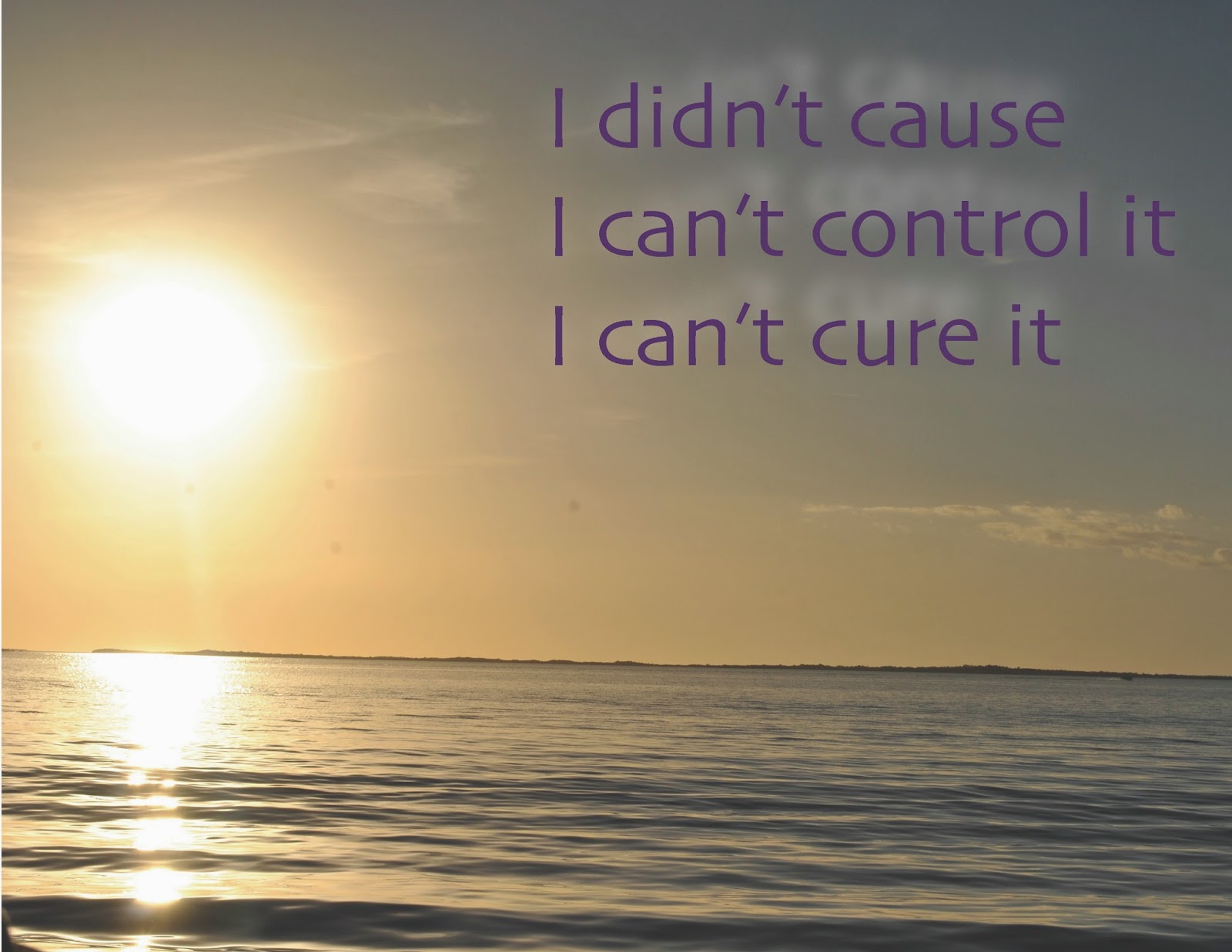 Posted by Unknown at 1:12 PM No comments:

The hardest part of THINK is that not everyone follows those same rules of thinking before you speak.

Is it True?
Is it Helpful?
Is it Inspiring?
Is it Necessary?
Is it Kind?

Well tonight after weeks and weeks of trying to help my mother out (taxes, dad's getting lost, invitations to Easter, etc.), tonight I was accused of not only stealing money from my mother, but stealing money because I was possibly "trying to get back at" her for divorcing my biological father. While the details are crazy and not really relevant, the point is that my mother in her delusional state made some very nasty accusations and that just plain hurts.

So I'm trying to stay calm, take a deep breath, and keep moving forward...without getting angry. I know she doesn't know what she's saying. And while it's very, very hurtful, I am trying to navigate the best way to let her know that (1) obviously I didn't and couldn't steal money from her, (2) what she said upset me, and (3) I'm growing weary of the accusations and having a great deal difficulty continuing to help her out at the level she is requiring because of her ugly attitude. 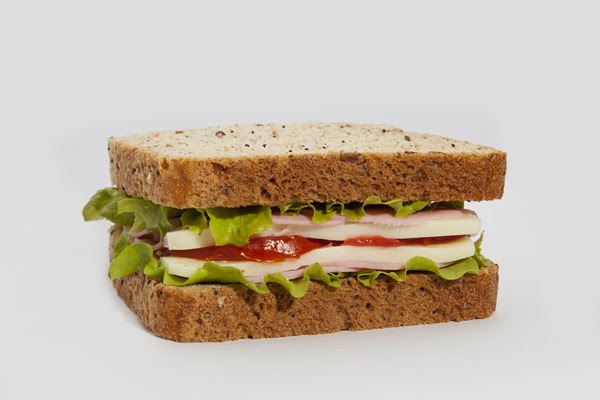 All of this is new territory for me. And I'm betting it's new territory for a lot of people my age. That "sandwich generation" can be a big drain on anyone stuck in the middle of generations. I need to take care of my children and continue to raise them, all the while helping my parents to navigate growing old. 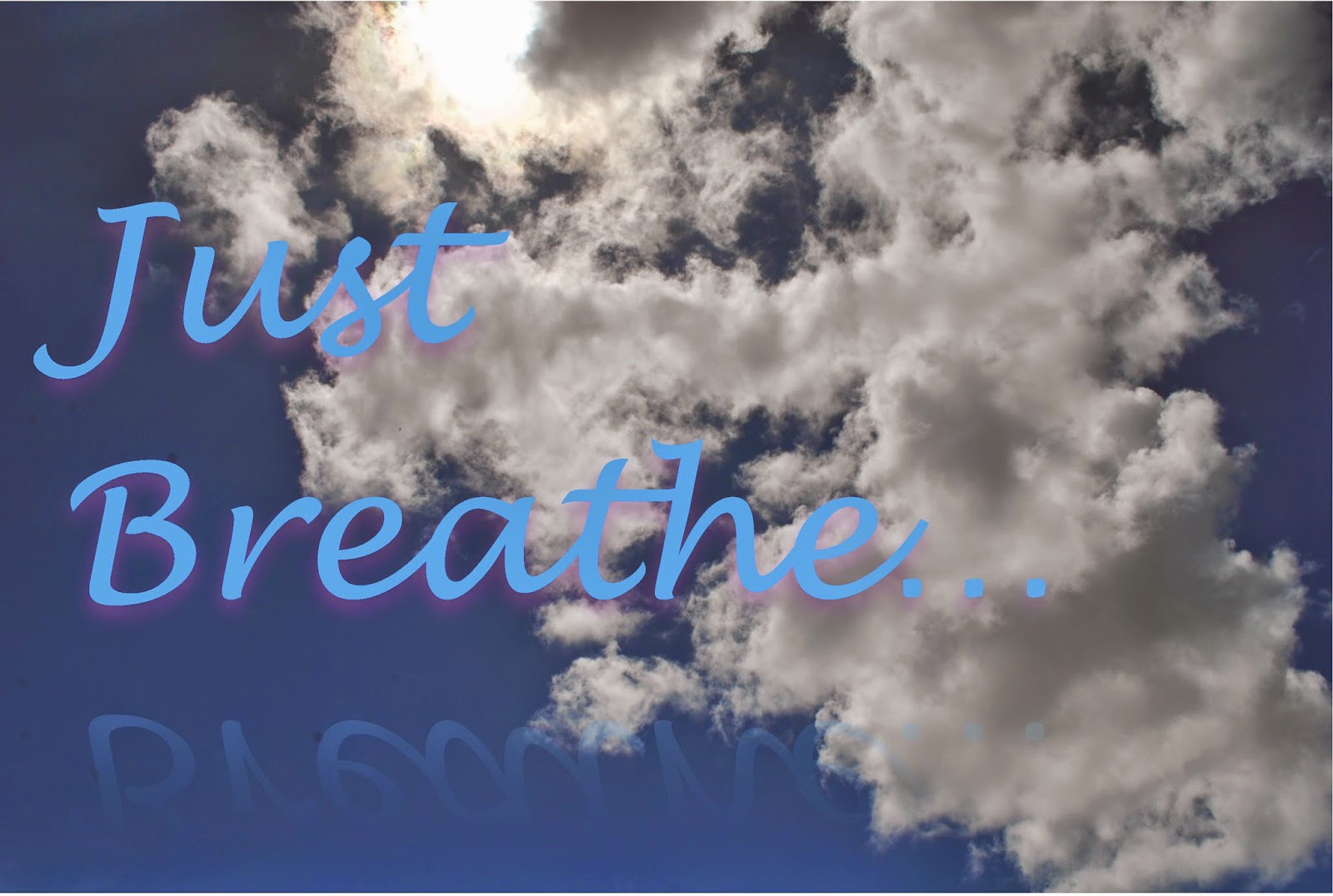 Spread Your Wings! (and don't forget to breathe)
Posted by Unknown at 7:32 PM No comments:

THINK is another Al-Anon/Alateen slogan, but it's also one that I've seen many teachers use in the classroom. The acrostic reminds us to think before we speak. All those golden nuggets of truth you mom and dad taught you as a kid help you to get along with other people better. So if you can't say something nice, then don't say anything at all. 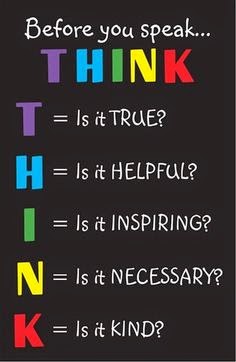 Staying positive in the midst of adversity is a lot tougher than I thought it would be. There have been many changes in my life the last five years since leaving academia. While the trip has been mostly positive, there have certainly been many bumps along the way.


My main slogan with life's little upheavals has been "Just breathe." A friend of mine got me a friendship bracelet that reminds me everyday to just breathe. Even when I feel like I can't say anything positive to someone or about a situation, I take extra long breath and let things settle in my mind before getting down about life. Everything passes and even the most nightmarish situation in the world can be made better with time. I've experienced this firsthand and as long as I stay positive, eventually everything works out for the best. 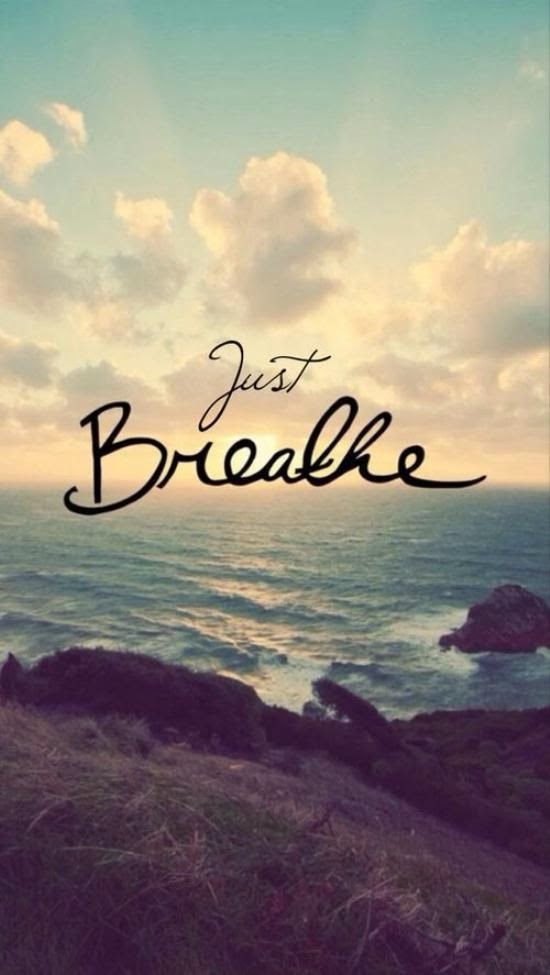 I no longer fire off strongly worded emails or phone calls. I try to wait 24 hours, read, and reread something before I send it. Just that little extra time can calm me down enough to THINK about what I'm saying and refocus the frustration or anger into something positive.

Staying positive affects my whole outlook, the way I work with my children, coping with the difficulty of aging parents, frustrations with business, and everything else life throws my way. I can almost always turn things around and laugh rather than getting angry or upset. And even if that doesn't work, time passes and the difficult situation changes.

I love this quote by Ghandi: 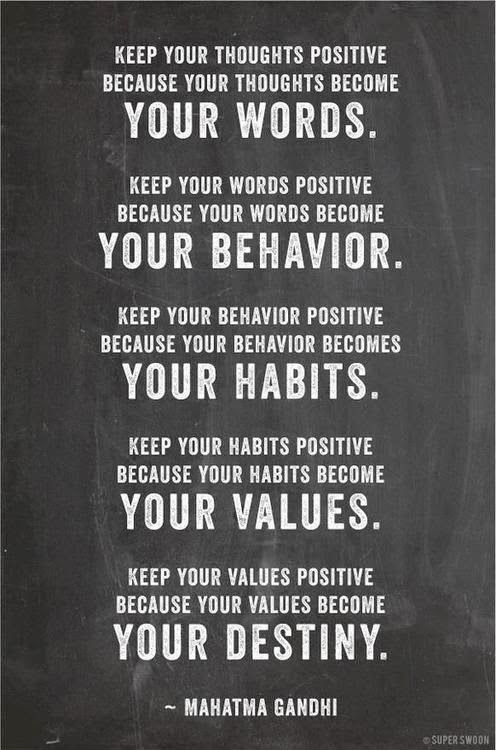 Posted by Unknown at 7:07 AM No comments: 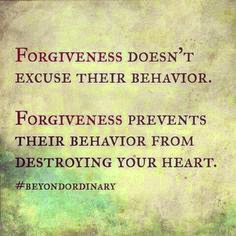 Forgiveness is difficult at best, especially when there is no request for such action. But living in the past, harboring ill will, and allowing someone else's bad behavior to influence your present state of mind will continue to drive you crazy. Forgiveness is a necessary in order to be able to move on with your life. 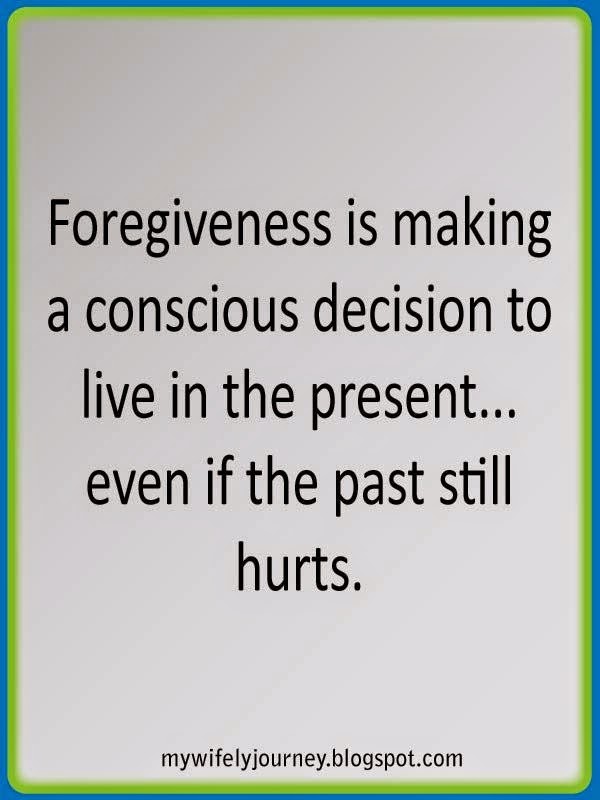 Everyone makes mistakes. But owning up to those mistakes and then ultimately forgiving those mistakes in yourself and in others takes a great deal of strength and determination. It's hard for me to keep that state of forgiveness in my heart. Slipping back into being angry over past actions is easy. What's hard is remembering to keep moving forward one day at a time. Al-Anon really focuses on the present, not the past and not the future. Just take life one day at a time and get through. I try to keep my kids focused on the individual days, rather than being worried about what will happen 10 years from now. Instead, be grateful for what you have, focus on making each day a happy memory. This doesn't mean we don't plan ahead—of course we do! But we don't worry about what the future may or may not bring, what others may or may not do or say. 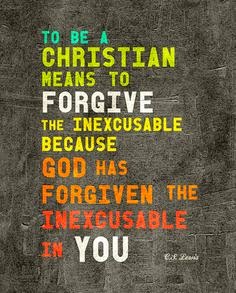 Posted by Unknown at 8:30 AM No comments: 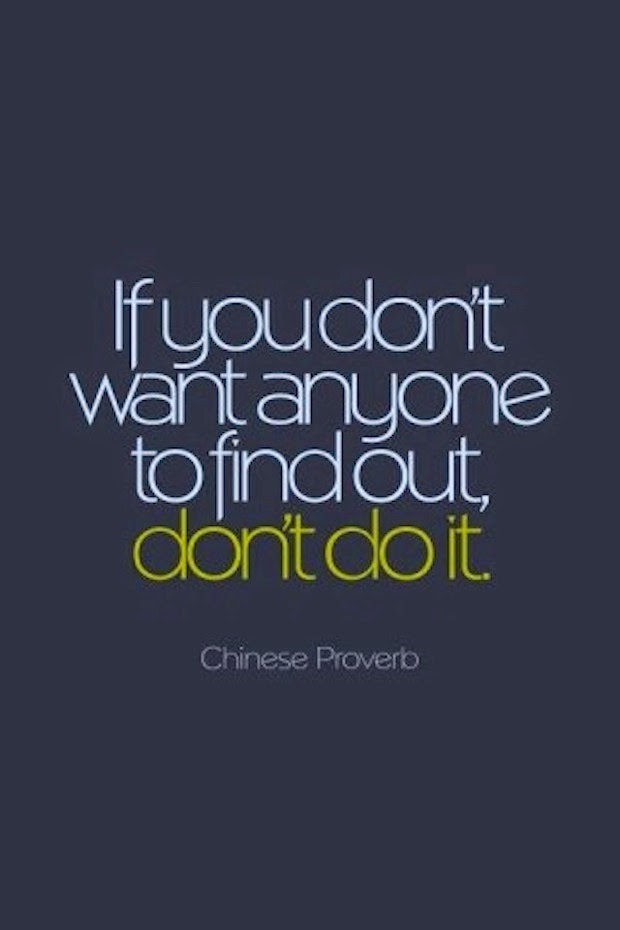 Be a champion for your children

This says it all: 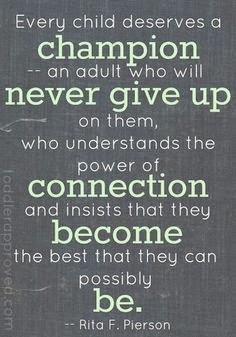 Posted by Unknown at 6:38 AM No comments:

A moment of levity 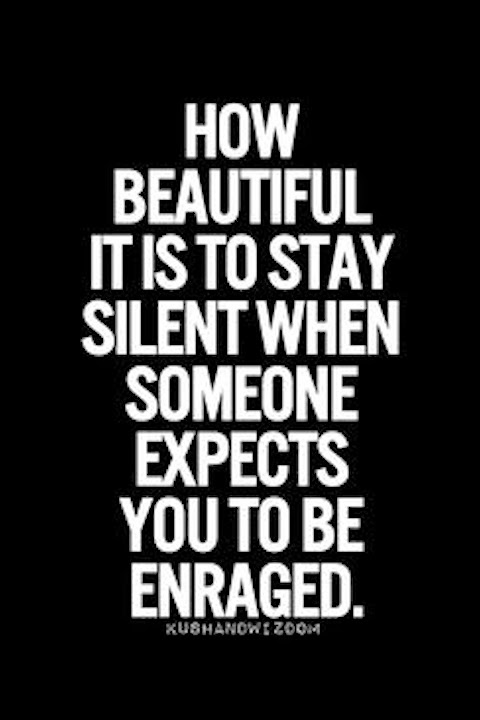 Don't ever let anyone take away the respect you have for yourself.

Today I read that Billy Joel is going to have a baby with his girlfriend. Seriously. Billy Joel is 65. How sad for this unborn child that his or her father will likely never live to see his child graduate from college, have a successful, happy life, or see his grandchildren. I suppose he could have a Doogie Howser genius kid or raise an irresponsible child who has his own kids when he's a teen. So I guess it's possible BJ could live to the ripe old age of being a grandparent, but after the abuse his body has taken with the drugs and alcohol, it's highly unlikely.

Being a selfish and narcissistic comes naturally to drug and alcohol abusers. Their whole world starts to close in and they can only see themselves. Everyone misjudges their drinking, everyone else is to blame for the missed deadlines, bounced checks, skipped events at school. Somehow the whole world is wronging them. 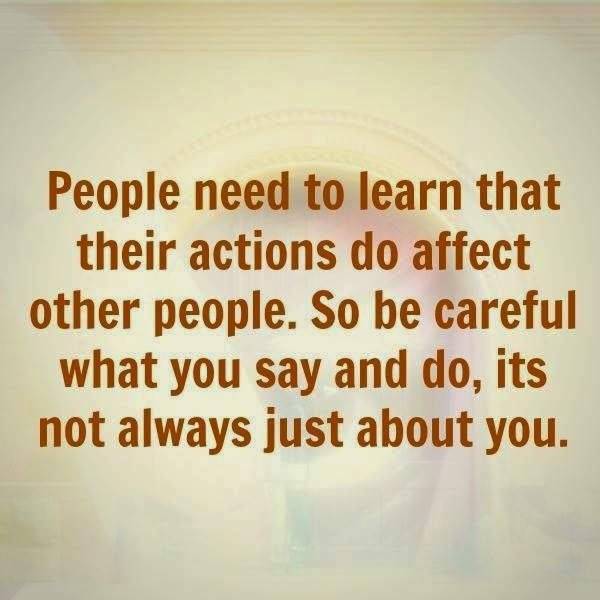 Children learn by watching the adults in their lives. Some adults are responsible and nurturing, while others only care about themselves. The narcissistic alcoholic usually doesn't make it through a long-term relationship with his or her child, because eventually the child grows up and becomes more mature than that particular parent. Unless, of course, the child grows up and mimics the parent's bad behavior. BJ isn't the only parent who will not actually raise his child. Plenty of parents out there have children and have no responsibility whatsoever in actually raising them. 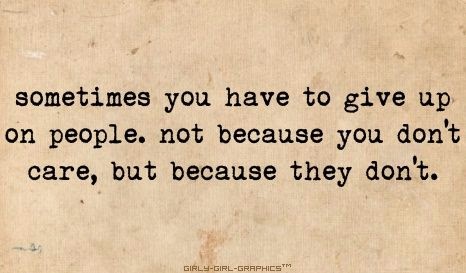 Many alcoholics attempt to raise their children, but fail miserably, isolating themselves from their family, missing out on events and activities associated with childhood. Many children of alcoholics grow bitter and unforgiving without the help of a group like Alateen or Al-Anon.

Often the alcoholic looses all her/his friends in this drunken stupor isolation, deliberately or not. Oh sure, they eventually make new friends and it usually takes a while until those new friends figure it out. But eventually those friends loose interest, too. In the best of times, the narcissistic alcoholic realizes that she/he has a problems and seeks help. No one can make them recognize their issues. They have to do it on their own. Then and only then (and usually, but not always, with the help of a 12-step program) can the alcoholic make a try change and start thinking about someone other than him/herself.

Billy Joel apparently has the maturity level of a flea and is surrounded by a bunch of stupid yes men and women who tell him everything he does is great. At least his wife might be able to make a good commercial for Viagra. Think about someone other than yourself. Why bring kids into this world if you're not going to be responsible for them? And by the way, money does not equal responsibility.

Posted by Unknown at 6:58 PM No comments:

So I realized today is April 11th and I haven't written in nearly two weeks! Been crazy busy with life. I deal well with stress, but sometimes the fact that I've got at least 100 people puling me in every direction takes its toll. 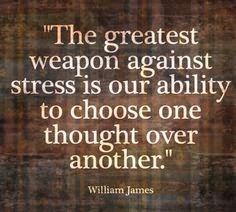 But I've learned to control what I pay attention to, prioritizing who needs what and where the greatest need lies. My kids are always the first priority and everyone needs to learn to take a backseat to them. Recovery from having an alcoholic in the family takes a lot of patience and reinforcement with kids, no matter how old they seem to be. They constantly blame themselves for the drinking, bad behavior, and narcissism an alcoholic indulges in.

Going to Alateen meetings was a huge step for my kids. My son is very outgoing and has an outwardly strong personality. But in reality, he's got the same nerves and lack of confidence my seemingly shy and quiet daughter has, when discussing personal and private issues such as having an alcoholic in the family.

The 12 steps of Alateen are the same 12 steps as Al-Anon: 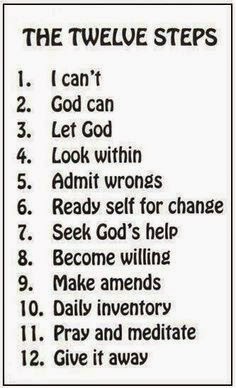 These 12 steps help us focus on getting better and coping with an alcoholic in the family. There is no hopelessness, but rather if you keep moving forward one day at a time, things will get better. Not blaming anyone, including the alcoholic, is a key issue, and one that is hard to do. Children are resilient, but they tend to blame themselves in situations like ours. My job is to make sure my kids are getting the best help they can.

One of the many slogans of Alateen/Al-Anon is HOPE. 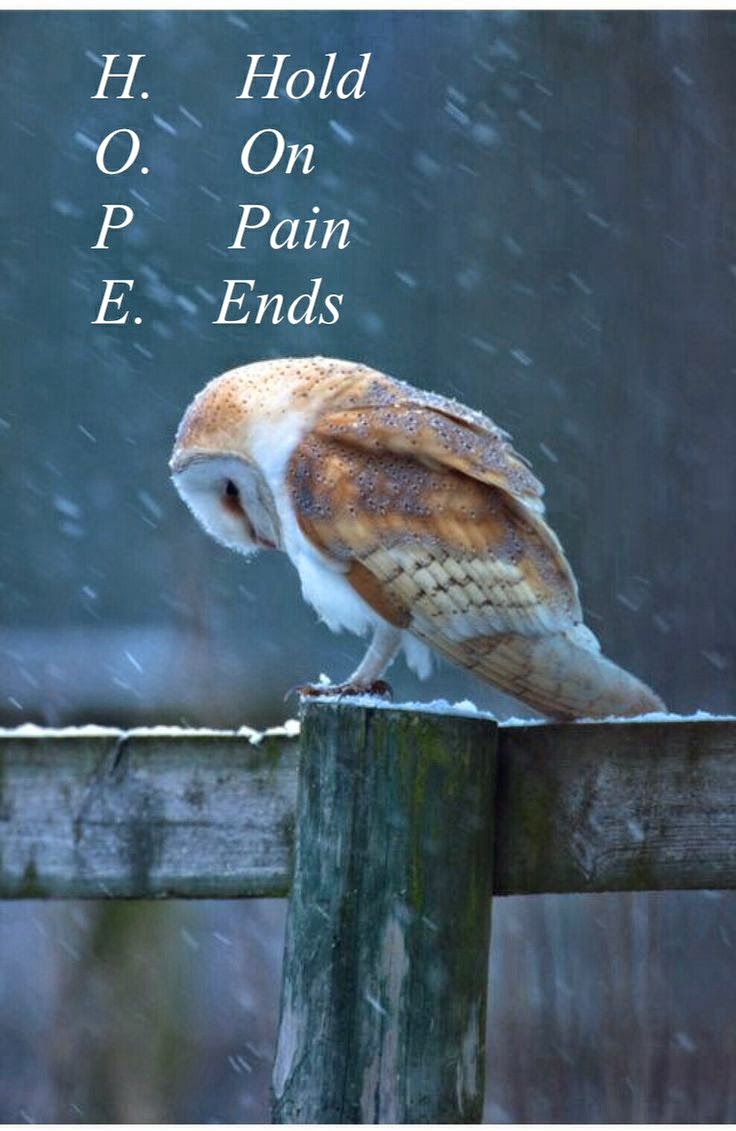 That says it all.

Spread your wings!
Posted by Unknown at 11:32 AM No comments: