Haven't written here in about a month. It's been a crazy springtime. My father died in April after a long decline in health over the last few years. He was diagnosed with Alzheimer's in August and then wound up in the hospital Easter weekend because he couldn't sit up and support his weight. At that time, I learned from the paramedics that the falling was only going to get worse as the Alzheimer's progressed. While he was in the hospital for 2 weeks, the doctors found that he had a large malignant mass on his esophagus. He was sent home with Hospice and died right about a month later.

During this time my mother was especially agitated, calling the police in the middle of the night because she didn't want the caregivers around, kicking out the Hospice nurses, and generally trying desperately to gain control of an uncontrollable situation. Her mood swings were horrible and she refused to take any medication to help the situation.

I am now in the process of applying for guardianship of my mother. She is unable to take care of herself and has fired all but one of the caregivers. This is not an easy process by any means. She needs me to pay the bills and help read things for her, yet she doesn't want to relinquish control over anything. One minute she thanks me for all the help and the next minute she's cursing me and threatening that God will take it out on me when I die. I do my best to stay strong and not take anything personally, but it's hard to be around her.

I am so very thankful for the friends and family (blood relatives and those who are not). They give me strength to get through this situation. We are all flying to Ohio next week for Dad's memorial service. It will definitely be a bittersweet trip. 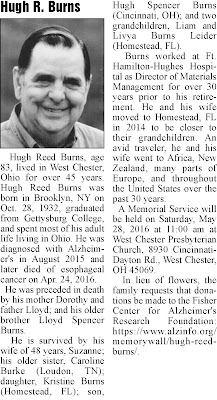 Posted by Unknown at 1:08 PM No comments: